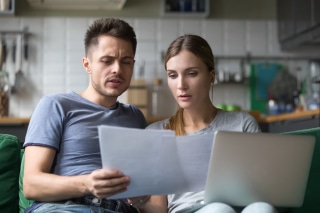 Paying taxes is probably low on the list of things that give Americans a warm-and-fuzzy feeling. But getting hit with a surprise tax bill when filing? That makes 34% of Americans feel concerned, 33% frustrated, 32% disappointed and 28% angry, according to a recent AICPA survey conducted by the Harris Poll.

Assuring the correct amount of taxes are withheld from your paycheck can go a long way toward preventing an unexpected tax bill – and the negative emotions that come along with it.

The Tax Cuts and Jobs Act (TCJA) made changes to withholding in early 2018, and those changes were reflected in 2019 in a redesigned IRS Form W-4. Still, nearly half — 45% of tax-filing Americans — have no idea when they last updated their withholding.

To avoid an unpleasant tax surprise and better manage monthly budgets, the AICPA’s 360 Degrees of Financial Literacy program is encouraging Americans to check their tax withholding and make updates accordingly on the updated W-4.

Why is the W-4 form important? And how will federal income tax withholding affect household budgets? To learn more, AICPA Insights spoke with Kim Hardy, CPA/CFF, member of the AICPA’s National CPA Financial Literacy Commission. Below are highlights from the discussion.

What changes to the W-4 form recently took effect? Why do they matter?

In addition to lowering the federal income tax rate paid by most Americans, the TCJA created some new tax exemptions and got rid of some old exemptions, including the personal exemption and the dependency exemption.

The result of these changes is that tax withholding tables — the amount taken out of your paycheck according to how much you earn — were altered. The W-4 form was redesigned to reflect these changes.

The updated form also asks about additional sources of income and if someone works multiple jobs — the intention is to make withholdings more accurate.

Married couples must coordinate their W-4 forms because their tax rates are based on the earning information entered on the W-4 from both jobs. Attempting to complete the W-4 without enough information from both individuals could result in an inaccurate withholding figure with too much or too little taxes being withheld. That has the potential to lead to a large tax bill or refund.

What are some of the downsides to withholding too little or too much?

Withholding too little from your paycheck can result in owing taxes when your personal tax return is filed. Depending on the amount owed, a tax bill can eat up a significant portion of an individual’s savings and throw their budget off track for weeks or months.

Our recent survey found that many Americans are not able to pay an unexpected tax bill without borrowing money or using a credit card. And going further into debt to cover your tax liabilities can lead to financial problems down the road.

Withholding too much can result in a refund when filing taxes. Although more Americans say they would rather have a refund than owe money, there are many ways you could use those funds throughout the year instead of waiting on a refund. For example, additional net pay each month can help build an emergency fund, free up additional money to pay down debt or even earn additional income if invested.

Tax withholding is just one part of an individual’s entire financial picture.

Individuals can decide if more take-home pay is preferable to receiving a lump sum from the government once a year. And if they do opt for more net pay on a monthly basis, they need to have a plan in place to pay what they owe when it comes time to file.

How can people update their W-4?

It’s easy. You just need to update the form and submit it to your employer.

If the taxpayer is single with income from only one job, then they only need to complete the personal information section and sign the form.

For married taxpayers, or those with more complicated tax situations — working multiple jobs or having investment income — the information from the most recent tax return should be used to complete the new W-4. For those individuals, the IRS has created a withholding estimator to assist with completing the W-4.

The AICPA’s National CPA Financial Literacy Commission recommends that Americans review their last pay slip and compare it the IRS’s withholding tables. If needed, make changes to your withholding while this information is fresh in your mind. Doing this task on an annual basis and whenever there are changes to your financial situation is the best way to keep current.

The 360 Degrees of Financial Literacy website has information to help taxpaying Americans understand the new W-4 form and how their tax withholding impact their financial plan.

AICPA members can help their friends and neighbors avoid unexpected tax bills by using this blog and the 360 resources to spread the word on social media about the importance of updating the W-4 form.